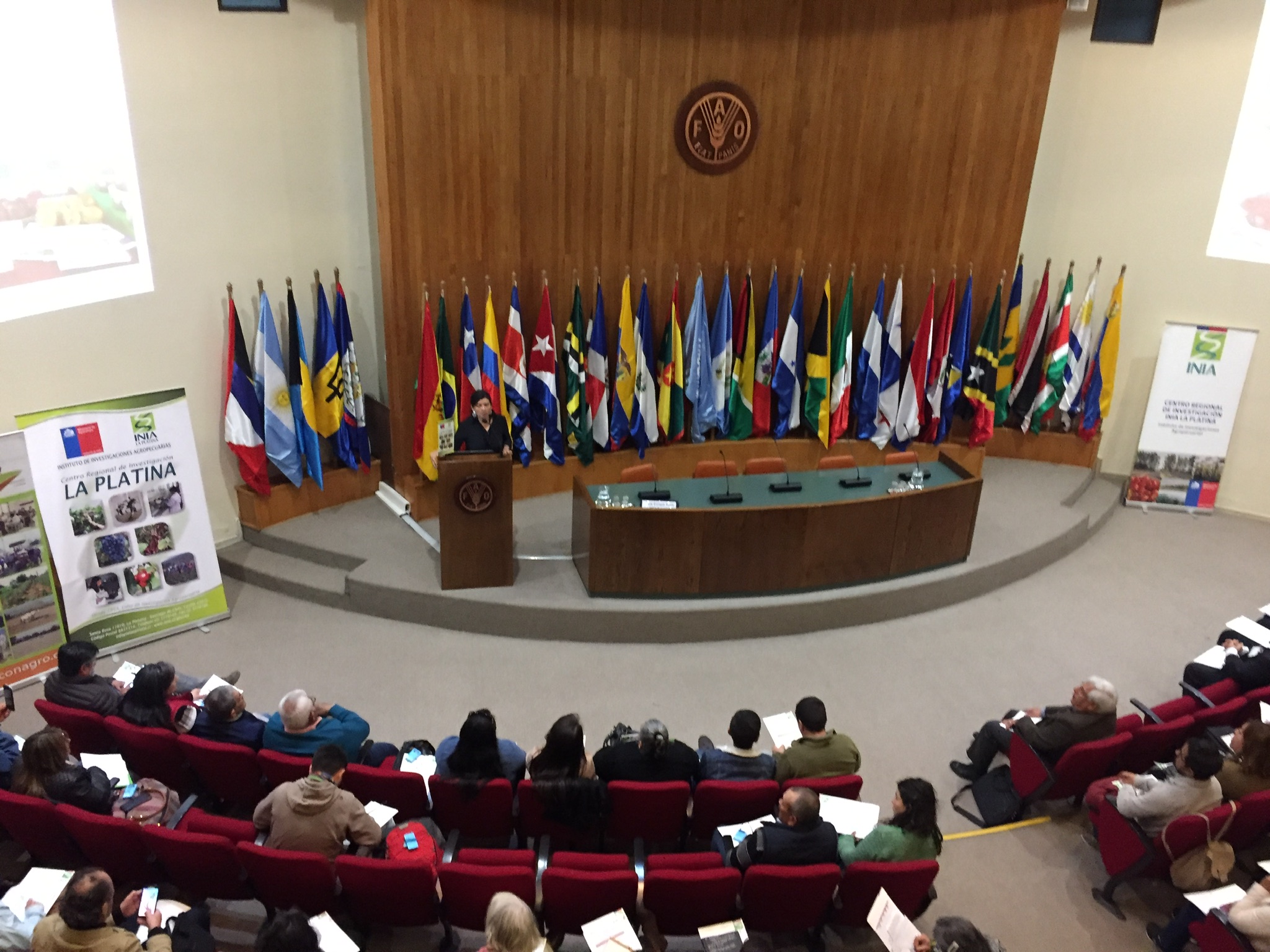 Recover varieties that fitshave to extreme weather conditions and that contribute to food security and sovereignty, as well as to biodiversity of the agri-food sector, was he theme addressed in he seminar organized by INIA and FAO, co-financed by Fontagro and supported by COP25. 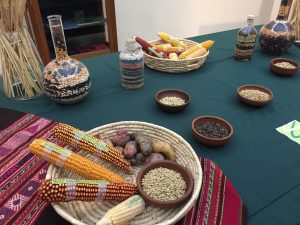 Santiago, October 2019.– Traditional seeds are gaining relevance, due to their sensory and adaptability characteristics. In addition to being resilient in the face of environmental stresses, consumers are demanding crops of yesteryear, such as "limachino tomato" or "choclero corn", which have unforgettable aromas and flavors. This was indicated by the person in charge of the Germplasm Bank of the Agricultural Research Institute (INIA), Erika Salazar, who in the framework of the seminar held in the offices of the Food and Agriculture Organization of the United Nations (FAO) addressed the situation of traditional seeds in Chile. Too, associate researchers of INTA of Argentina, IPTA of Paraguay and the University of the Republic of Uruguay, they exposed production and marketing experience in their respective countries. 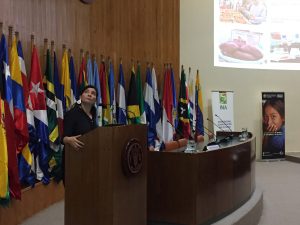 About, Erika Salazar explained that one of the existing problems in Chile is that there is no sufficient quantity of seeds to respond to a market that is opening up to products patrimonial. “Traditional seeds, also called local or criollas, do not are in farmers' fields or farmers msmall volume attacheds, and are not available to whom want to produce them. Further, they have to be worked on and studied in order to know their performance and identify their response potential to biotic and abiotic stresses. For istor, you have to strengthen their production, improve their quality and regulate their exchange and commercialization", angrythoisted.

ORtra difficulty facing traditional seeds -said the INIA specialist- are the empty normative, regarding their exchange and commercialization, that is beginning to be addressed from the recent resolution of the Ministry of Agriculture N ° 2638/2019 that defines the concept of traditional variety and opens the possibility of registration low certain requirements. Meanwhile,Uruguay and Paraguay are ahead since they performed legal modifications what recknow the existence of this type of seed in national systems, allowing production and commercialization as reproductive material. 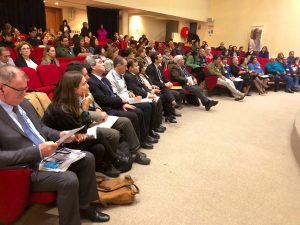 INIA has a long work to do so that this type of seeds have a place in the Chilean seed system. As part of this effort, the three-year project is in the final stages "Center for the Varietal Offer of Traditional Seeds: A Model for Strengthening the Informal Seed System and Increasing the Competitiveness of Family Farming", supported by FONTAGRO -cooperation mechanism between countries of Latin America, the Caribbean and Spain that promotes the innovation of Peasant Family Agriculture, competitiveness and food security- with the collaboration of the National Peasant Confederation and Chilean agricultural workers (CONAGRO).

The international seminar on traditional seeds was attended by the FAO representative in Chile, Eve Crowley; the Seremi of Agriculture of the Metropolitan Region, José Pedro Guilisasti and the echarged with relations iINIA international and director of INIA La Platina, Emilio Ruz, who valued this type of initiative. 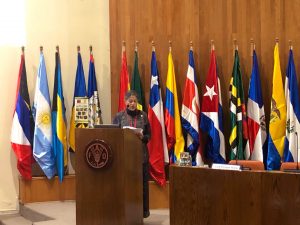 In particular, the representative for FAO in Chile stressed that “one way to face the impact of climate change is to continue researching the most common foods and possible innovations in the way they are used. Another way is by ensuring that the most resilient crop varieties, which are more resistant to temperature changes, are preserved over time ”, emphasized Crowley. 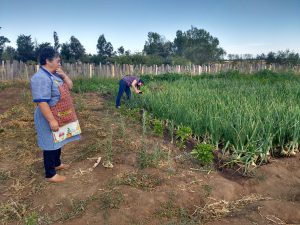 “The farmer complements the multiplication work that we do in the INIA Germplasm Bank, multiplying in their fields the traditional varieties that they want to try. With this, it is more efficient in achieving volumes to distribute, something that we cannot achieve, since it is not our function as a Genetic Resources Unit to multiply seeds in large quantities. To achieve this, we formed a Network of multipliers, a component of the proposed model in the project. Currently, there is a Network of 14 multiplier farmers in the Ñuble region, specifically in San Carlos”. In addition, Salazar added, “farmers provide us with valuable information on the behavior of the varieties in the field, with the reconstruction of the history of each variety, and we teach them better conservation and multiplication practices, methodologys agroecological production, soil management. It is a virtuous collaborative work model between the researchers and the farmers, where the exchange of knowledge is the pillar ”. 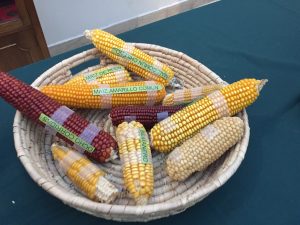 Another component of the model is the Varietal Offering Center (COV), which in Chile is being built on land of the San Carlos Agricultural School, thanks to a loan granted by the Municipality of the commune to the Violeta Parra Federation, other project partners . “The COV is a local seed bank that will be managed by the farmers, linked and supervised by INIA. It is a center with mixed functions of conservation and seed supply. The seeds offered there are those that multiply the Network of Multipliers and INIA. The center is the link between conservation ex situ and in situ. In this center, any farmer who wants to grow traditional seeds will have access and will also have information to help them choose.. Additionally and, Through a simple online platform that is being created, the farmer will be able to access seeds that are public and that have been preserved thanks to the work and contribution of the Chilean peasantry to the conservation of our agricultural heritage ”, specified Erika Salazar.

Regarding the seed safeguard that INIA develops, the researcher explained that INIA's Genetic Resources Conservation Program began more than 50 years ago and currently the institution is the only one in the country that has a Bank Network system, with international standards , in which you can find several collections of various groups of crops, such as cereals, legumes, forage crops, vegetables and vines. "The Varietal Offer Center will facilitate access to this germplasm”Announced the researcher.

They have the peculiarity of adapting, which is given by he environment. In other words, “the seed that is not able to grow in a soil with little water, poor, or in environments with high solar radiation or very cold, will die. That is to sayIt is the environment that is exercising the selection and only the plants that have the genes that allow them to survive in those environments that are almost always more rustic will remain. Since traditional seeds are genetically heterogeneous, you are more likely to find in a population plants with the best response, ”Salazar explained. Also, the specialist pointed out that this seed has a high value for the peasant given the cultural heritage, some have religious significance and others are associated with their food and festive traditions.

The Instituto de Investigaciones Agropecuarias (INIA) is the main agricultural research institution in Chile, linked to the Ministry of Agriculture, with a national presence from Arica to Magallanes, through its 10 Regional Centers, as well as technical offices and experimental centers in each one of the regions of the country.

pIts mission is to generate and transfer knowledge and strategic technologies on a global scale, to produce innovation and improve the competitiveness of the agri-food sector. www.inia.cl