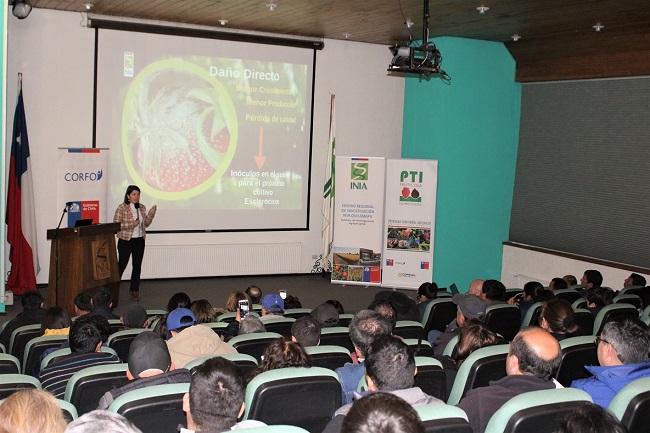 Technology exposed to a hundred producers in a seminar in Chillán, would allow to obtain vigorous production free of pesticides.

In order to strengthen the technical knowledge of strawberry producers linked to the Integrated Territorial Program (PTI) Frutícola Laja Diguillín, the seminar “Soil health in the production of Strawberries in the Ñuble Region was held at the INIA auditorium in Chillán. ”Organized by Corfo, the regional ministerial secretariat of Agriculture and INIA Quilamapu.

The activity was attended by a hundred producers and was attended by the regional director of Corfo Ñuble, Daniel Sepúlveda, the regional director of INIA Quilamapu, Rodrigo Avilés, and the Seremi of Agriculture, Fernando Bórquez, who highlighted the future fruit growing of the region . In this regard, he mentioned that a decade ago, Ñuble's fruit production reached 3,000 hectares, an area that has increased fivefold today, reaching 15,000 hectares "and with a potential of 150,000 hectares."

Bórquez added that in recent times the production of strawberries, raspberries, blueberries and European hazelnut has become massive in the region, with strawberries being the ones that represent a great advantage for the small producer, since "production is achieved within the year, without having to wait more than five years as in other crops ”. Likewise, he highlighted the versatility of this crop that "it is possible to produce both in the foothills and on the coast, which represents another great advantage".

Meanwhile, the Regional Director of INIA Quilamapu, Rodrigo Avilés, indicated that INIA is working hard on the biological control of fruit trees, that is, on the use of natural enemies to control pests and diseases. Likewise, he said that INIA can collaborate strongly in technical solutions and with the experience acquired in the production of strawberries. "We make ourselves available to be part of this process and help generate the technological changes that are required in this territory," he concluded.

The use of endophytes

Among the exhibitions, the seminar included that of INIA Quilamapu researcher Lorena Barra, who presented an innovative disease and pest control technology based on endophytic microorganisms.

"These are microorganisms, between fungi and bacteria, that grow inside the plant and provide certain benefits such as growth promotion, but also provide protection against pests and diseases", explained the researcher.

The agronomist showed the results recently achieved in a successful project developed in Maule, where farmers learned about the advantages of using endophytes to control pests and diseases in vegetables. Barra indicated that the experience achieved, perfectly, can be transferred to strawberries. In this sense, the researcher showed the Endomix T1 product developed by INIA in Chillán, as a result of the project financed by the Maule regional government, to stimulate the use of cleaner horticultural production.

The professional indicated that the same product could be applied in a strawberry crop, although she highlighted the need to know "if these same microorganisms are also endophytes of strawberries." He highlighted the importance of having the support of the Ñuble regional government to develop an initiative for the use of endophytes in minor fruit trees, just as Gore Maule did in vegetables. "This would allow not only to look for alternatives for soil diseases, but also for fungal diseases such as botrytis and for the action of aphids and thrips on strawberries."

The researcher stressed that "if a management were done only on the basis of endophytic microorganisms, we could have a pesticide-free crop, very healthy plants, very vigorous and with very good productivity." He added that it is technology that "is just being used in other parts of the world, such as California, where diseases with endophytic fungi are already being controlled, and the growth of plants with them is being promoted."

Lorena Barra will be part of the researchers who between October 8 and 10 will be present at the 1st Latin American Symposium on Biological Control to be held at the Termas de Chillán, an instance that will bring together the main scientists of the continent in this discipline. Biological Control gains more strength every day, by seeking environmentally friendly instances for the development of agriculture.