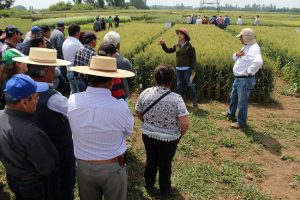 More than 400 producers from the Maule, Ñuble and Biobío regions participated in the Field Day organized by INIA Quilamapu, a traditional annual meeting between producers and researchers to transfer relevant knowledge and information to promote crops in the south-central areas of the country .

Held at INIA's Santa Rosa Experimental Field in Chillán, farmers who arrived from the Maule, Biobío and Ñuble regions carefully followed the tours of the three technical stations arranged for the opportunity. The cultivation of quinoa and its weed control, in charge of the researchers Kurt Ruff and Lorenzo León; the wheat varieties recommended for the south central zone of Chile, presented by researchers Iván Matus and Dalma Castillo; and the most innovative crop rotations, led by researcher Juan Hirzel, captured the interest of the attendees, generating a great instance of interaction. 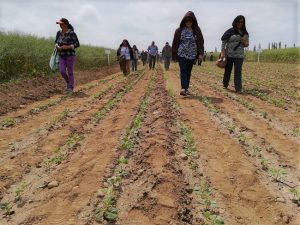 The Field Day, which had as general coordinator the person in charge of the INIA Quilamapu Technology Transfer and Linkage Unit, Abelardo Villavicencio, was complemented with stands that showed other areas of work of the Institute, such as Diseases in fruit trees, the Improvement Program rice genetics, the Bank of microorganisms and the Soil Laboratory.

At the end of the day, the attendees were able to witness the talk "Nutritional and physiological problems of fruit trees in the south central zone and their relationship with climatic conditions" which was given by the researcher and fertility specialist, Juan Hirzel.

During the Field Day, the Deputy Director of Research and Development of INIA Quilamapu, Luis Inostroza, indicated that the INIA proposes three large areas of research for the Ñuble and Biobío regions: the biological control of pests and diseases; emerging technologies; and crops. 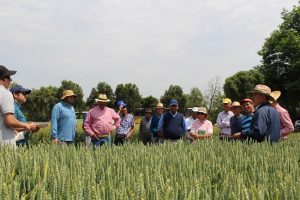 Inostroza indicated that the emphasis of the field day was focused on the progress made in the area of crops that are very useful for producers. “In this activity we show part of our history; that is, we show varieties of wheat that the INIA Quilamapu has generated in 54 years of life; but we also show recent varieties that contain disease resistance, high potential yield and high adaptation to different environments, in a climate change scenario ”.

From the point of view of crop agronomy, the manager added that strong progress has been made in the management of stubble. “Today solutions were shown and they go through the incorporation of stubble. We show the different techniques for incorporating stubble in irrigation environments. (Over time) we will have the alternatives, the information and the data to tell farmers that they can incorporate a certain volume of stubble, without altering their productivity ”. 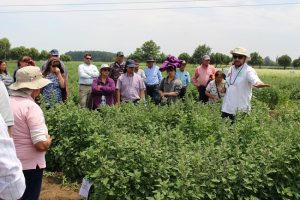 Regarding the work carried out on traditional crops (INIA is a permanent generator of varieties of flour and candeal wheat, beans, and rice, among others), the manager said that “we continue to work on a key traditional crop such as wheat, but also in new crops that can be incorporated into the rotations. This new crop is quinoa and we are working on the development of varieties ”. However, he added that more than being interested in the quinoa grain, the industry is interested in the protein it contains.

The above is related to the criteria that the Agricultural Research Institute has recently incorporated. “INIA is not only interested in developing crops but also functional foods. We are interested in producing not only grain, but also flours and the protein that grain generates for industrial purposes ”.

Finally, Inostroza emphasized that the Ñuble and Biobío regions are going to undergo a process of agricultural reconversion. “Probably several farmers are going to convert, and others will continue working with traditional crops. We will have answers for both ”. He indicated that INIA will continue to promote crops, “incorporating aspects of tolerance to drought and adaptation to climate change, efficiency in the use of nutrients and development of functional foods. We are focused on increasing the amount of wheat proteins to generate high quality bread and pasta ”.