An inflatable tent in the shape of a giant chinita, about 60 square meters in area and 4 meters high, served as access to the large tent that hosted the First Biological Control Technology Fair for two days. 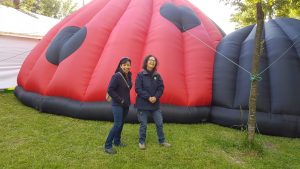 This iconic insect of biological control, transformed into the largest chinita in Chile, was one of the novelties of this mega-event that INIA Quilamapu recently organized.

Assembling this giant structure, in addition to coordinating the logistics for an event of this size, involved many hours of dedication, creativity and organization.

For 10 months, the organizing committee watched over every detail so that the First INIA Biological Control Technology Fair was a success. So it was. 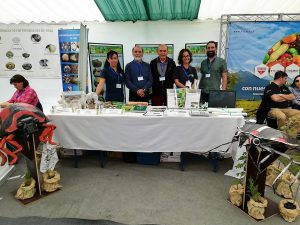 The Fair hosted 33 national and international presentations, 28 stands with public and private companies and more than half a thousand attendees.

This activity was classified by the authorities as a milestone for INIA, since it gathered in one place all the contributions to biological control, both in research and in the development of bio-inputs, to make them available to companies and producers that develop a type of agriculture based on sustainability, protection of the environment and production of healthier food.

In Chile, biological control has been used for almost 115 years continuously. Dozens of beneficial species have been established and the agroecological balance lost due to the permanent entry of exotic pests has been restored. 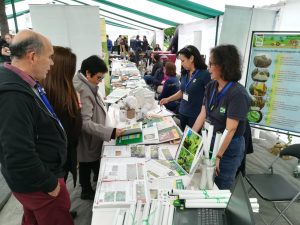 INIA Quilamapu, through the Technological Center for Biological Control, presented all the work developed in the field of microorganisms and the Bank of Microbial Genetic Resources. Let us remember that INIA Quilamapu is a world reference in the management, rescue and preservation of materials that are very important, both for science and for agricultural technology today and in the future. Meanwhile, INIA La Cruz, also a pioneer in biological control activities first and then in integrated pest management (IPM), positioned itself as the oldest entomological center in South America.

Let us remember that research activities began in the Valparaíso Region in 1937 with the inauguration of the Insectarium of La Cruz, an Entomological Center that for several decades developed programs for the biological control of insects and mites, pests of agriculture, becoming a pioneer center in Latin America. in the development of entomology applied to pest control in addition to being a pioneer in the introduction and quarantine of dozens of natural enemies for different agricultural pests. 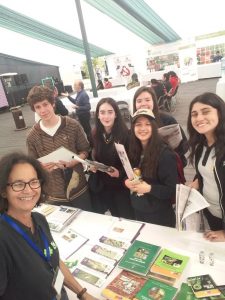 INIA La Cruz through its stand "Approaching science" showed its publications in this area and the sample of tiny insects that were shown in large size. We are here, said entomologist Ernesto Cisternas, "to bring science closer to the public and connect supplier companies with their potential market by providing information on the different alternatives developed around the biological control of agricultural pests and diseases."

The sample was complemented with technical talks that addressed solutions for the different pests that affect agricultural crops in both conventional and organic orchards.