Pilot Program promoted by the Seremía de Agricultura, executed by INIA Remehue and financed by the Regional Government of Los Lagos, allowed the integration of Peasant Family Farming into the meat value chain.

A few years ago, raising male dairy calves was unfeasible from the economic point of view, however, thanks to a program promoted by the Seremía de Agricultura, executed by INIA and financed by the Regional Government of Los Lagos, it was achieved generate profitable production models that, in turn, allow small farmers to be incorporated into the meat production chain in a competitive way. 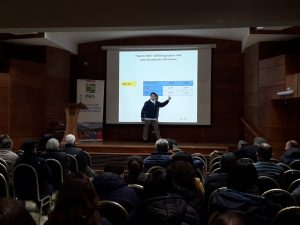 The pilot program, which considered the technical advice of INIA and economic incentives to small producers by the State, favored dozens of peasant families in its 4 years of execution that received a total of 1,527 calves for raising.

The Seremi of Agriculture, Juan Vicente Barrientos, highlighted that thanks to this work it was shown that calf rearing can be a profitable business, favoring in a special way peasant family farming. "One of the main axes of the Government Agricultural Program of President Sebastián Piñera is to improve the quality of life of the rural world and that is what has been achieved thanks to this initiative," he said.

Sergio Iraira, Regional Director of INIA Remehue and specialist in animal production, explained that “INIA has generated an INIA calf rearing model as the results of 10 years of research and by applying it at the level of small producers we were able to confirm the effectiveness of this proposal from the technical, productive and economic point of view ”.

Among other measures, the calf rearing protocol developed by the INIA considers milk substitute deliveries once a day, plenty of water and access to the pasture from 21 days of age, regardless of the time of year. "With this management it is possible to achieve productive goals: 100 kilos of live weight at 100 days of age and 200 kilos at 240 days of age, which allows obtaining good profitability," he said.

Alejandro Álvarez, director of Aproleche Osorno, highlighted the work done, because it benefits the entire sector by incorporating small, medium and large farmers.

Jaime Altamirano, a small livestock producer in the Fresia area and president of the Meat and Milk Network of the Los Lagos Region, highlighted the support received and the achievements obtained by small farmers in the region, with the technical support of the Ministry of Agriculture, through INIA, and indicated that it is necessary to continue this State policy permanently, so that this business persists and it is possible to prevent the livestock population from continuing to decline.

In his opinion, the State should maintain the payment of an incentive of 1.5 UTM per calf in the rearing stage, which was given to all farmers who met the established production goals.

These antecedents were made known in a seminar recently held at INIA Remehue in Osorno, in which the results obtained in the work with 141 small livestock producers in the Los Lagos Region, who raised dairy calves, were presented within the framework of the program called: "Development of the livestock associative business in Peasant Family Agriculture".

On the occasion, preliminary data of works carried out with crosses between dairy cattle with double pulp breeds such as Charolais and Belgian Blue were also delivered, to further improve the productive and economic results.