In INIA Carillanca a field day was held aimed at the quinoa item, an event that brought together 180 attendees. The activity was part of the project “Technologies to promote the cultivation of quinoa as a productive option for family farming in the south-central zone of Chile, carried out by this research center, with funding from the Foundation for Agrarian Innovation (FIA) and the co-execution of the Universidad de la Frontera, through the Agroindustry Institute. 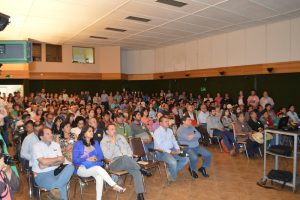 It should be noted that quinoa is in the category of "forgotten and underused species", characterized by its potential to help face global challenges such as reducing hunger and poverty, contributing to biodiversity and adapting to climate change. In addition, it is a crop of high nutritional value as it has essential amino acids for the human body, has a high protein content and provides a wide range of vitamins and minerals. Thus, the national and international demand for this crop has experienced rapid growth in recent years, mainly in gourmet niches.

Peru, Bolivia and Ecuador produce 80% of quinoa in the world. Demand is variable but increases at an average rate of 12% per year. Quinoa sales between 1992 and 2002 multiplied 4 times. While from 2002 to 2012 it multiplied by 39 times. This project is very valuable since it articulates various actors and allows promoting an ancestral crop. In addition, there is a high demand for quinoa worldwide due to its potential and nutritional characteristics. It has all the essential amino acids that humans require; contains between 11 and 20 % of protein greater than wheat, barley, rice, corn; comparable to milk; significant amount of vitamin B, in addition to containing lithium and calcium. 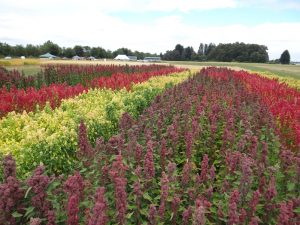 “In Chile, quinoa has been cultivated ancestrally by indigenous peoples and is currently found from Tarapacá to La Araucanía, which together with its high demand and attractive prices represents an interesting alternative for small farmers in the AFC segment. “However, the crop presents important gaps that have prevented the mass production of its production in south-central Chile. At the national level, there is only one registered variety of quinoa and most of the plantings are with local ecotypes. Even more serious is that there is no optimized and documented management strategy for the crop, which is why producers maintain traditional, low-technology practices. This has a negative effect on yield, costs and increases the risk of the crop, constituting an important barrier for the incorporation of new producers ”, indicated Jorge Díaz, Director of the project.

This project has defined 4 lines of work. The first refers to the identification of quinoa germplasm with outstanding agronomic and / or functional characteristics in terms of yield and quality; which will allow in the medium term the obtaining of new varieties, favoring the competitiveness of the sector. The second points to the definition of integrated agronomic management technologies that allow the development of the crop in the center-south of Chile; This will allow for an optimized crop management strategy, starting from sowing, fertilization, irrigation and control of pests, weeds and diseases. 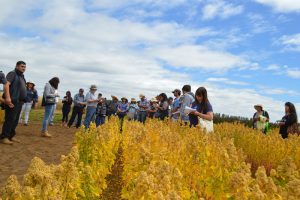 The third objective is in the hands of UFRO, who are in charge of the development of industrial prototypes based on quinoa that can be scaled by AFC actors in the medium term; This will make it possible to make value-added alternatives available to small producers and entrepreneurs for different market niches.

Finally, the project aims to transfer and disseminate the results obtained to producers, consultants and companies in the center-south of Chile; which will facilitate the scaling and adoption of the technologies developed through the generation of a certification mark for the management strategy. In addition, at this stage, special emphasis will be given to small Mapuche producers in La Araucanía, establishing participatory seedbeds and providing advice to indigenous communities that are members of the project.

The project is expected to generate a territorial quinoa production of approximately 400 to more than 1,800 MM$ / year; increase the hiring of temporary labor in 1 man-day / year / ha, increase quinoa yield from 0.6 to 2.5 tons per hectare, consider quinoa exports in southern Chile by 500 tons per year and increase the surface planted with quinoa in more than 2,000 hectares per year. 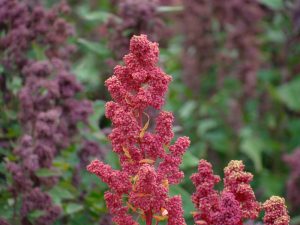 This project relies on the work of small agriculture in the south through food with territorial development and Identity, where Vilcun has a lot to contribute through the partner communities. This is where INIA Carillanca will play a relevant role, through a virtuous alliance with its associates and the support of the Foundation for Agrarian Innovation (FIA), which opted for this region.

During the field day, some results achieved to date with field trials were reported, whose yields obtained in the 2015-2016 season exceeded 70 qq / ha, leaving far behind the national average of 6 qq / ha. For this season, that is, 2016-2017, it is expected to continue with these productive achievements at the trial level and to replicate them in the seedbeds established with the communities. Along with the above, the nutritional analyzes carried out on the quinoa grain indicate a protein content around 16%, much higher than any cereal, and of high quality as it includes all the essential amino acids required by humans.

About INIA
The Instituto de Investigaciones Agropecuarias (INIA) is the main agricultural research institution in Chile, dependent on the Ministry of Agriculture, with a national presence from Arica to Magallanes, through its 10 Regional Centers, as well as technical offices and experimental centers in each one of the regions of the country.